Arriving at Fonteintjie, at the foot of Teebus in the early afternoon on Friday we had time for a quick visit to nearby Steynsburg before it was time to camera bag Koffee and Tee bathing in the golden glow of a late afternoon winter sun. The following morning we decided Koffee would precede Tee and with overnight temperatures hovering around freezing we waited until the thermometer was starting to rise before driving over to the base of Koffeebus. Whilst not a big mountain this iconic Karoo Koppie will make you labour before you can leap with reward upon its summit. At moments it was quite literally two steps forward for each slip back. 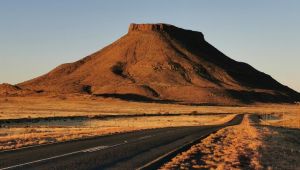 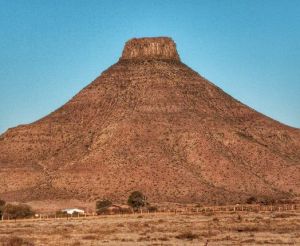 These Koppies owe their existence to a brief geological window about 180 million years ago when molten magma forced its way up to the surface of the earth from 100’s of kilometres beneath the surface. This formed narrow layers of dolerite ( sills ) which being harder than their surrounds formed hard caps which today give us this typical Karoo feature. Although a hard rock dolerite weathers in such a way as to form blocks and is surprisingly brittle which presents quite a challenge to prospective climbers. 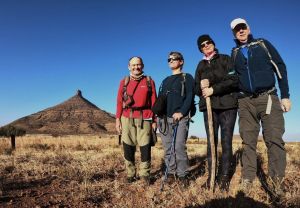 Koffeebus can lay claim to no less than three Trig beacons on it’s top. We visited each one in turn and peered over the edge at certain points. During these proceedings the hike leader managed to divorce himself from the remaining group ( or was it vice-versa ? ) and it was only after establishing that neither party had been blown off the top, as by
now the wind had picked up considerably in strength, that communications were reestablished and the group descended off the Koppie. This downward momentum combined with the loose marble like rocks scattered across its surface produced considerable wear and tear to member’s lower limbs and half the party decided to pass on the  afternoon Tee. 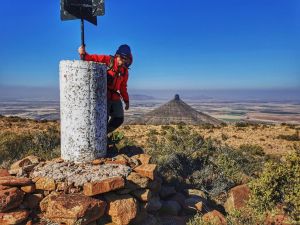 Beacon no 1 atop Koffie with Tee in the background

And so, after a quick sandwich in the farmhouse one Mad Dog and the Englishman set off up Tee. The ascent appeared somewhat easier than the morning and after about 60 minutes they found themselves at the base of the final obstacle. Peering upwards immediately resulted in a very stiff neck and induced waves of vertigo in half the climbing party. In anticipation of such circumstances the week prior had been spent scouring the Club’s constitution where a small sentence had been uncovered basically instructing committee and accompanying members not to place themselves in unnecessary peril for personal gain. After some deliberation it was agreed that without further equipment vertical progress would be in violation of the constitution and it was elected to undertake a complete circumnavigation of the summit. This was duly undertaken and successfully completed before the descent ensued and saw us back in our farmhouse shortly before sunset. 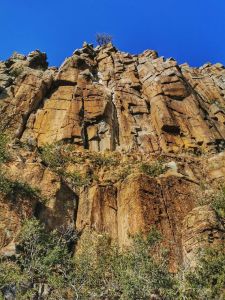 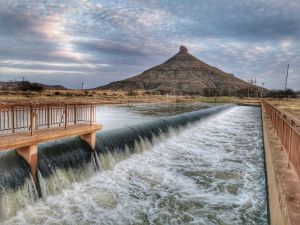 From the Orange to the Fish

The next morning ( Sunday ) we drove 1.5 Kms to inspect the Orange Fish river tunnel outlet on the neighbouring property. Full details of this engineering project can be found at 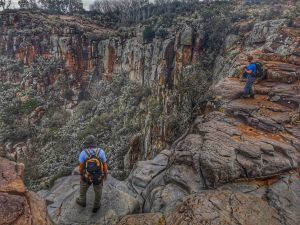 We then headed off in to one of the emptier corners of the Karoo in search of a waterfall. We did indeed find a rock feature that under the right conditions would be a very impressive waterfall but not at this moment given the drought conditions that currently exist. By midday we were heading back to the Garden Route but not in such a hurry that we didn’t have time to make detours to Middleburg and Aberdeen amongst other notable N9 waymarks.
So, lets just – “Feel the fear and do it anyway”.