This hike was put on the calendar to provide an opportunity for the not so fit to also get out there and enjoy our beautiful area. Unfortunately the weather proved to be a bit windy and cloudy, but perfect for hiking.

We set off from the carpark on the ‘Wild Side’ of Buffelsbaai and tackled the Buffelsbaai Hiking Trail – a sandy path that goes up and over the dunes to the main Buffelsbaai beach on the Brenton side. We soon reached our high point of 63m (but we did start at sea level!) 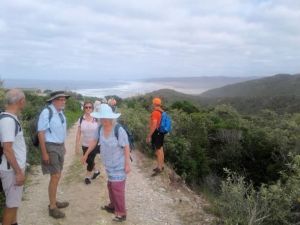 From there we had beautiful views of the sea on both sides of Walker Point (the official name for the point). We even spotted a pod of dolphins playing in the breakers. 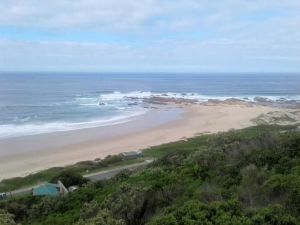 Towards the Wild Side (the West) 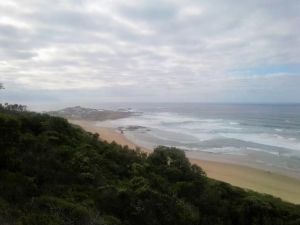 The 2.8 km through the milkwood forest to the coast on the eastern side went by quickly as we tried to identify various trees and plants. 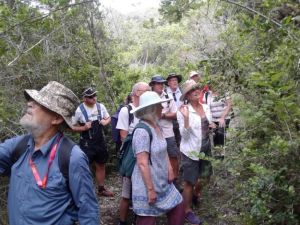 Romy says it’s a Rhus, Chris reckons it’s a Searsia, but we all agreed it’s a Taaibos!

Once back on the beach it was just a short walk to get to the Buffelsbaai Kafee, where we stopped for coffee, breakfast and even a Coke Float. 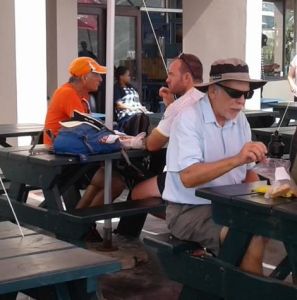 Mike enjoying his breakfast on the deck of the Buffelsbaai Kafee. Henry and SP in the background.

Chris decided to take a short cut back to the vehicles, while Jan, Claire, Mike and Romy decided that a swim was in order, especially as the visitors from Sweden were going home in a few days’ time and had to make the most of the summer while they were here.

The rest of us strolled along the road past the caravan park and back unto the beach on the western side of the point. We watched a few fishermen on the rocks (who did not have much success) and made it back to the cars at about 12 noon. 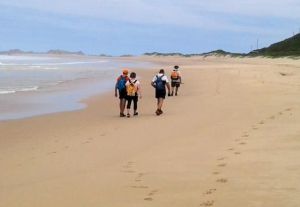 Along the beach back to the cars

All in all a very relaxed morning hike of about 6km completed in about 2.5 hours.
Thanks to all the hikers who came along – as Arnie said: “we will be back”.