Two weeks ago, I wrote a meet report with specific mention of warnings that should have been apparent in respect of a hike we undertook and the importance of observing said warnings. Sadly it seems, I neglect to follow my own advice – for this expedition that saw 10 members assemble for a long weekend from far and wide the warnings were there in black and white for weeks if not months before – in this case the area we visited did “exactly what it says on the tin” ! Great – Winter – Corner. 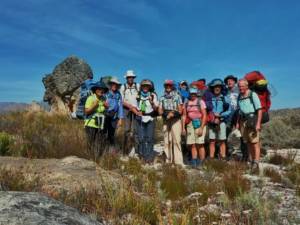 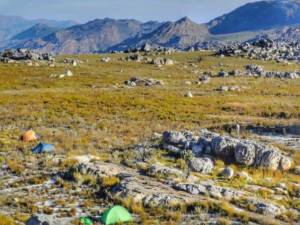 On Saturday most of the day was spent travelling to the Reserve via Porterville and up the Dasklip pass. Very punctually by 1.30pm we had all arrived and set off for our camp at the nearby Disa pools a mere 3kms away. A very warm night, soft sandy ground and a good night’s sleep ensured we were all ready the next morning for a leisurely 9am start.

An easy meandering trail led us thought fantastic rock formations passed the Groot Kliphuis campsite near which we paused for a lunch break before descending into a river valley where we came to a T-Junction. Left to Perdevlei and the road less travelled or right to De Tronk on the slightly more well-trodden highway. We took the left option and a serious deterioration in the quality of the trail ensued for the next couple of hours. Fortunately, those who had gone this way before had left steady and frequent piles of “Klippies” which quite literally kept us on the not very straight but narrow and sometimes very overgrown path. On a couple of occasions, the “Klippies” misled us but without them we might have floundered for much longer in search of the way. Eventually the trail disappeared as did the “Klippies” and by the time we reached the Perdevlei ruins we felt as dishevelled as the “Emergency shelter” we found before us. Sheltering here had never been an option and we fought our way across the river to a nearby tree of decent proportion which offered little shelter but some imaginary comfort. 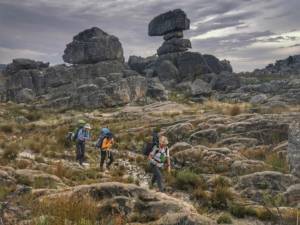 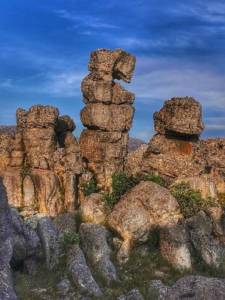 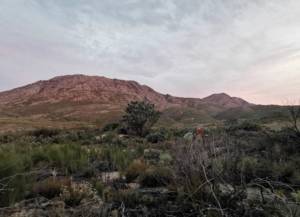 A magical sunset followed and the words of the shepherds – “red sky at night shepherds delight” sent us off to slumberland confident of fine weather for the morrow. Camped in this far flung corner we were already experiencing the “Hoek” but in the morning the “Hoek” was to combine with the “Groot”. 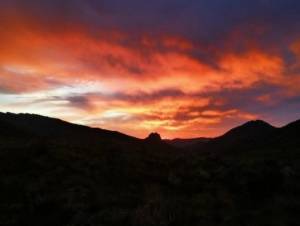 Four or five years ago I hiked up the “Grootpiek’s” little sister “Klein”. That was a three-day affair and no mean task and I should have known that the Groot Winterhoekpiek had no intention of being out done. After about two kilometres of bundu-bashing we descended steeply into another river valley and here the work began. Up and up we went over one brow only to find another above. Eventually by 11 am and no end in sight it was time to set a deadline and the group split into three – one stayed at a designated point awaiting the others return. The front group with the brief to reach the summit by 12pm and the middle to go as far as they could but turn back at 12pm. At 1150 as the front group rounded what they hoped to be the final stretch we realised it was just too far. There ahead lay the summit but still another kilometre distant and with some very intimidating rock bands in between. Fortunately, we were unanimous in defeat and we paused a moment to savour the splendour of the surroundings before heading back to regroup, eat our lunch and head for home. On this day the “Groot” was just too great ! 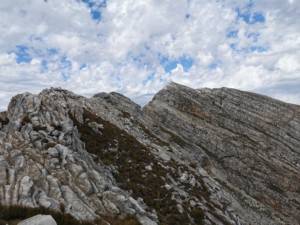 The summit of Groot Winterhoekpiek taken form our turn around point. Still approx. 1 km distance and some foreboding rock faces in between 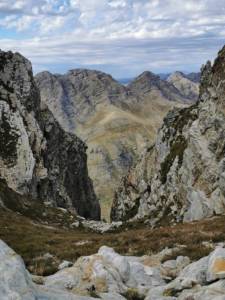 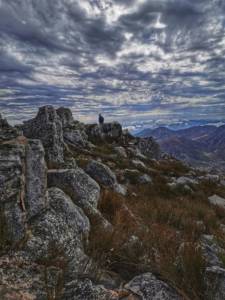 Up and down the never ending ridge 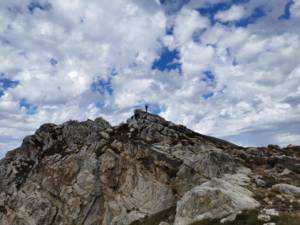 A summit but not the one we wanted

There were three parts to this story – so far, we have two and the third was still to show its hand. Rain had been forecast on and off but still no sign as we settled down for the night.

Like the proverbial bat out of hell the “winter” element arrived under cover of darkness and started to wreak havoc. Like the third of the three witches in Macbeth she was not to be out done and several of the group’s tents had no answer to her power.

Daylight could not come soon enough, and we peered through the opening into a complete white-out. Departure was delayed until there was a pause in the downpour sufficiently long enough to pack up and be on our way. We headed back the way we had come somewhat more confidently than two days before until we reached the T-junction where we headed down the path towards De Tronk. In spite of a delayed start we arrived at De Tronk and set up camp in a lovely space interspersed with rocks and by 2pm we were ready for our afternoon excursion – a three hour round trip to Die Hel which must surely qualify as a contender for one of the eight natural wonders of South Africa. Any disappointment that lingered from the previous day was surely compensated by a visit to this remarkable geological masterpiece. 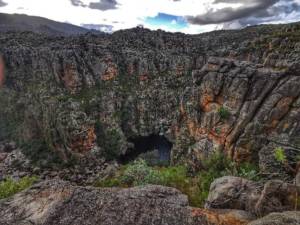 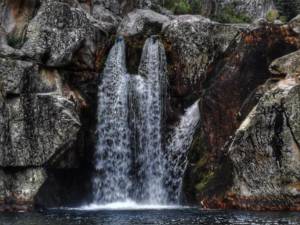 Can you spot the swimmer? 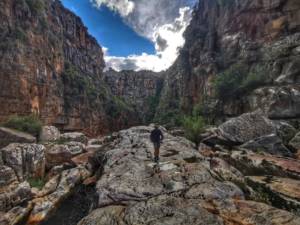 After a tranquil night’s rest under the full moon all that remained for us was a 12kms hike through another magical rocky landscape back to our waiting cars and the ride home. Most of us had time to ponder and reflect on the way home on a time well spent in great surroundings with good company in the Groot Winterhoek. 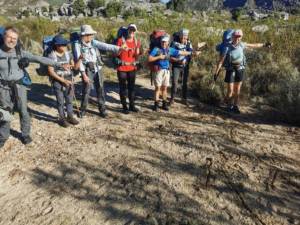 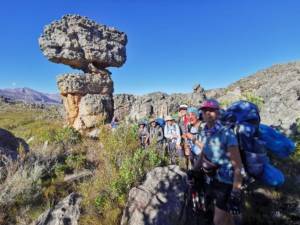 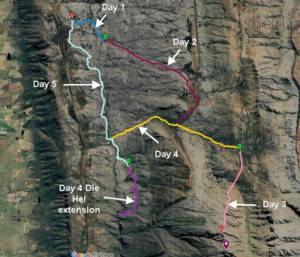