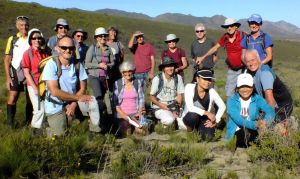 As the group was fit and energetic and there was no interest in the grade 1 social walk, it was decided that we would visit the Whale Cave (our descriptive name) and then those that wanted would recce a route to the top. 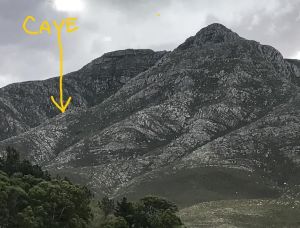 The un-named peak is in the Attakwaskloof Reserve and with our self-issuing permit off we went on a fresh clear day.

As we had a late start and to save time, a short 4×4 ride took us to the beginning. The climb to the cave takes about an hour, it is only just over a kilometre and 200m climb, but it is steep in places with no path and bushy slow going. The area burnt three years ago, but the approach is south facing and the vegetation has reestablished itself well, with all the burnt spikey bits slowing us down. The grade is 2M. 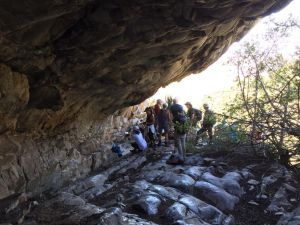 We had a break at the cave, which is quite large and has a very interesting series of paintings, which seems to depict whales or dolphins coming out of the water and standing erect. Whatever the pictures depict, much discussion ensued.

Hence our descriptive name of the Whale Cave.

From the cave the party split and Janet, Sandy & Bruno walked down.

The ascent to the peak was even slower. The distance was nearly 1.5km with a climb of 300m but was much steeper, bushier and rockier, with some exposure in places and took about an hour and a half. The grade was 3H. 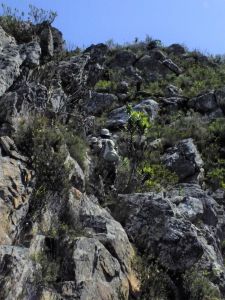 The 360 views from the peak, at 1078m, on this very clear day were excellent and admired by all. 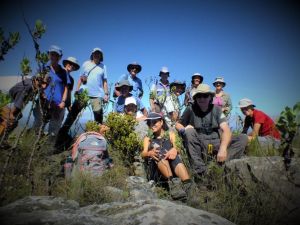 Happy, weary hikers on the peak.

The hike down, by a slightly different route was also very slow. Although the hike was only just under 5km long with 630m ascent / descent, the party had a tough but enjoyable workout.

Thanks to those that supplied photos for the report