I have often said that one needs two lifetimes just to explore all the mountains in South Africa (left alone the rest of the world). This hike proved that there is always something unknown to explore. I knew about this gorge, eroded by the Gamka and Gourits Rivers, right through the Gamkaberg/Rooiberg in The Klein Karoo. But I accidentally found the owner of the land.

Niekie Rust, a farmer from the Grabouw area, owns a huge piece of land to the east of Vanwyksdorp, called Jakkalsdans Nature Reserve, which includes most of this gorge and the surrounding area between the Gamkaberg and Rooiberg Nature Reserves. His wife is a rather well-known archaeologist and expert on the rock art of the Southern Cape, Reneé Rust. They also have a coastal holiday house near Stilbaai, where I met them and eventually lined up this hike.

The place is really remote. The last 3 km of road to their beautifully situated cottage overlooking the Gourits River, is very rocky and rough, only passable by high clearance vehicles. You know from the start that you can lose a tyre here (and it takes almost half an hour of concentration). Only 8 people could attend this hike, due to accommodation and transport limitations. Everybody managed to find the place and arrived with vehicles intact. Niekie and Reneé welcomed us late Friday afternoon. We made ourselves at home and had a nice braai using their wonderful thorn tree wood. 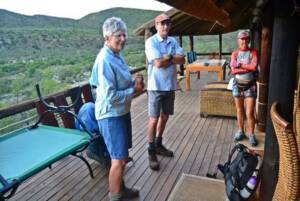 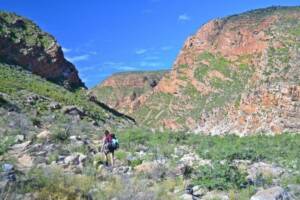 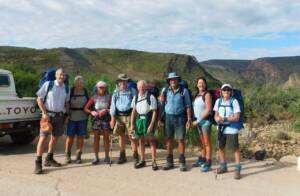 Saturday morning found us in various states of alertness and disorganisation. The group consisted of Derek and Jacomí Odendaal, Con and Annetjie Meyer, Clive Louw, Werner Frei, Jacolise Joubert and Dennis Lange. We were then transported over the Rooiberg Pass to the northern side of the mountains, where the Gamka River enters the gorge. The hiking terrain was not difficult, and we could follow an animal path for most of the way, showing a lot of baboon spoor, and also some leopard spoor. The gorge is deep and spectacular, with the cliffs and slopes rising up to 500 meters in places. I believe one can call it a canyon. 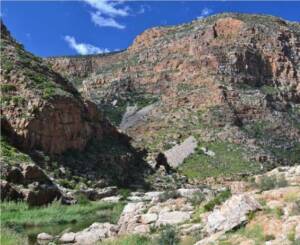 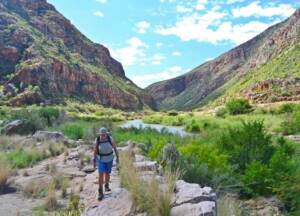 By Lunchtime we reached the confluence of the Gamka and Olifants Rivers. From here the river is called the Gourits. A few of us walked some distance up the Olifants River just to explore, and it was worth it. Then we hiked further down the gorge and found a good camping area with a long pool, some shelter and rocks. We had to use the river’s water for drinking and cooking. It didn’t taste so good, but we had to be content. We slept in the open and it was awesome to admire the Milky Way in all its’ grandeur.

Sunday morning dawned with a clear sky and I thought we could reach the cottage before lunchtime. But this section of the gorge was a bit more challenging than the previous day. At some point, we opted not to have a swim with our packs, but the alternative proved to be very rough, steep and overgrown. The scenery was still spectacular, and we didn’t mind spending more time in the gorge. The temperature rose by midday and we were glad to reach the cottage just after 1 pm. 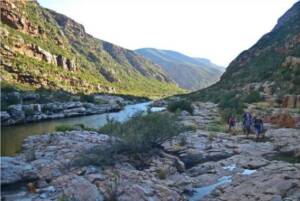 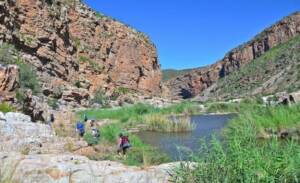 This hike is a real gem. The remoteness, unspoiled beauty, spectacular cliffs and exclusiveness makes it something to brag about amongst Mountain Club friends. If you ask me nicely, pay me something extra and bring some good wine, I might organise another trip to Jakkalsdans and the Gourits Gorge…