The North Cederberg seems to be slightly less prominently placed on hikers “to do list” than its Central or Southern regions. Perhaps it appears to be further away on the map and hence more out of reach but in fact getting there is comparatively quick and easy as we found last weekend. The Kliphuis campsite is located metres from the R364 otherwise known as the Pakhuis Pass that links Clanwilliam to Calvinia further to the North.

Once there however, access into the area is more limited than its Central or Southern neighbour and it’s time to tighten those laces and follow the very well-maintained trails.

Our group of 11 had travelled from many different corners of the Western Cape but after a night’s rest in Kliphuis camp we were loaded up and heading South by 8am on the Sunday morning.

Standing strong at the start amongst the Cedars: 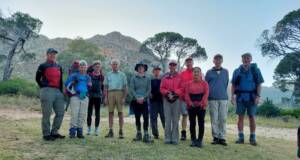 No self-respecting hiker would venture into the Cederberg without a copy of the Slingsby map in his pack, but nothing could have prepared us for what was to happen within about two hours of departing camp. The slings and arrows that the Cederberg decided to throw caught the leader on the hop (quite literally). Near the front of the group, on a clear trail, not stumbling through bundu or falling over in anyway, a distinct jab was felt in the calf of the leaders left leg. Causing nothing more than a slight distraction he continued for about 10 or 15 paces before realising there was something on his leg that hadn’t been there moments before. A first glance down and backwards suggested a locust had landed and was resting on the leg. A quick hand swipe failed to remove it as the realisation dawned that the offending item was a wooden skewer measuring about 6 inches in length embedded deeply into the flesh. No amount of pulling or tugging could remove it but fortunately one of our group was not only carrying a scalpel but was very proficiently trained to use it. A small trail side operation and we were moving again within 15 minutes! 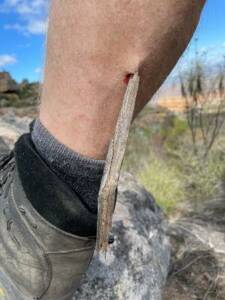 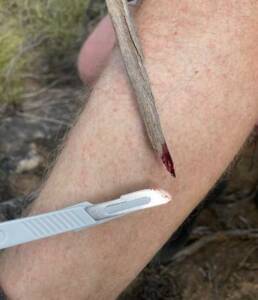 The first day was more downhill than uphill and over the course of about 15.5 Kms we descended about 600 metres to our first night’s wilderness camp right beneath the Krakadouw blockhouse at the foot of the Krakadouw pass. Once camp was established, we spent the remaining hours of daylight exploring the blockhouse, the nearby overhang, and gazing up the pass contemplating the next day’s apparently endless climb towards the peaks of the three Krakadouws which towered above us. 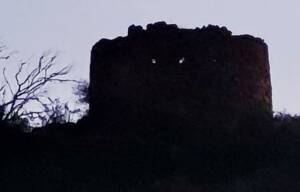 Sleeping beneath the Krakadouw guardian 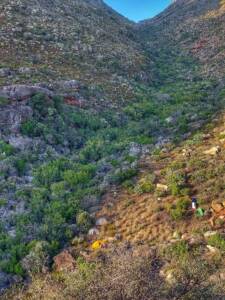 Camped at the foot of Krakadouw pass

All the down work from day one now had to be converted into restoring our altitude on day two – this resulted in a relentless but mercifully gradual 3-hour ascent to bring us to the vicinity of the old Hueningvlei hut where we paused for lunch. Our second nights wilderness camp was a short one kms climb away and we regrouped there at about 2pm. Here half the group divorced themselves (amicably I hasten to add) from the other half and continued towards the upper reaches of Groot Krakadouw where they set up camp within striking distance of the summit. The lower group camp had no running water, so a 30-minute afternoon foray was made to the abandoned hut below to bathe and collect water from the nearby stream. Water was scarce at the top but fortunately an adequate source was also found near the upper camp although this was a small walk away. 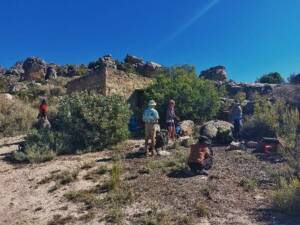 Lunch stop at the abandoned hut 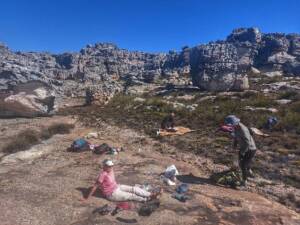 The Upper group campsite close to the summit

The lower group made an early start at first light on Day 3 and quickly reached the upper camp enjoying the cool early morning and unencumbered by large packs having left everything below.

The upper camp was unoccupied as the top dogs had set off to explore the mazes and alleyways that are so peculiar and distinctive to this mountain. Finding one’s way around the labyrinth is no mean feat but armed with a copy of an old hand drawn map, no-one got completely lost. After making a beeline straight for the middle beacon (of three) we then headed over to the more southerly beacon which in fact marks the true summit at 1744 metres. Our sideways trajectory was interrupted by “Panic sloot” which we in fact opted not to tackle and instead explored the beginning of “Long” street before crossing over to “Dood Loop” street and making our way back to the upper camp where we bumped into the others who were returned from their own more extensive explorations.

There was then a bit of shuffling of the group with some Uppers joining the Lowers and vice versa before the Lowers returned leaving the Uppers to continue their exploring. Everyone was back to the lower camp by 4 pm which still left enough daylight to explore the lower camp surrounds. 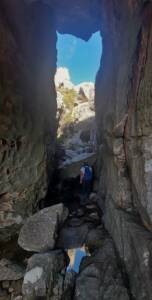 Gateway to the Upper realms of Groot Krakadouw 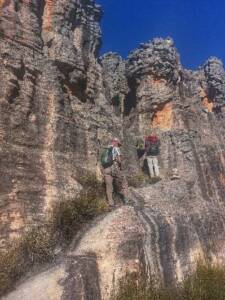 Climbing out of “Dood Loop” street 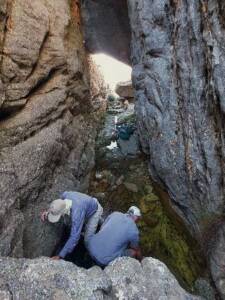 Water point (only one) on route to summit

These late afternoon explorations around the lower camp led to the discovery of what I will refer to as Natures Own Blockhouse. Perched on a rocky outcrop, like so many one can find in the Cederberg, was a cave entrance concealed by vegetation. This cave (Nature’s Own Blockhouse) boasted no less than 9 windows carved into the rock! Two separate parties made their way there in the afternoon and those who didn’t join in the afternoon headed up there at first light the next morning. 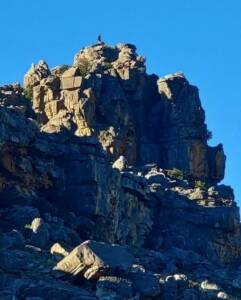 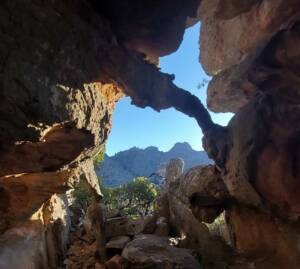 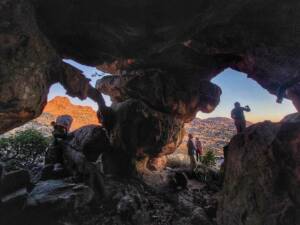 Early morning light through the windows 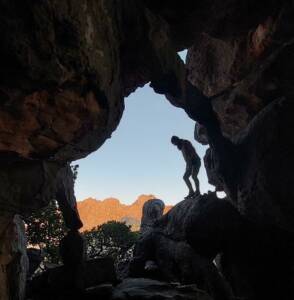 Despite all the early morning activity we maintained our planned departure for the long march home and were on the trail by 8am.

It was a long march (22.5 Kms) along a very beautiful jeep track that weaved its way through the unworldly landscape. 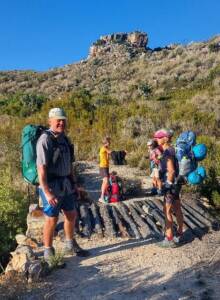 Again, the group divided itself with half striking for home and the other half heading off trail in search of the smaller hidden wonders, so easily lost in this majestic landscape. The Seekers unearthed camels, rhinos, chameleons, arches galore, caves, trees entwined with rocks and rocks entwined with trees. In fact – if you can imagine it – we found it on our long march home. 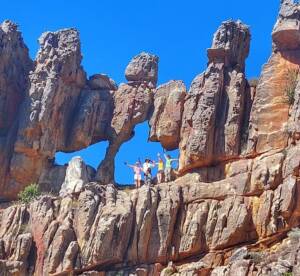 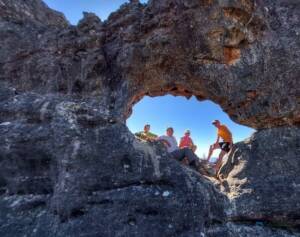 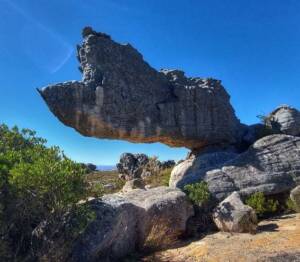 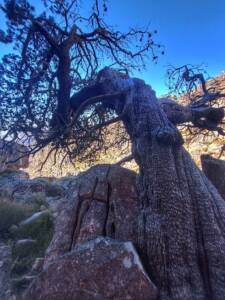 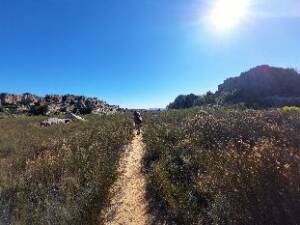 The long and not so winding path home 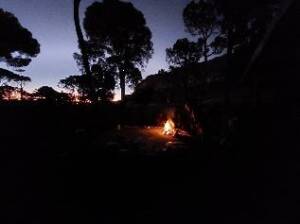 Home is where the braai is

Back at camp and united once again it was time to reflect on a great trail with great company and let the seeds of a plan for another visit start to germinate. We were blessed with great weather (always sunny with a cool nip in the air) and lucky for the time of year to find adequate, though not plentiful, water. There’s a little-known story about flight SAAF 647 that deserves further investigation, so if you are sad to have missed this one keep your eyes on the meet sheet for another opportunity to explore this remarkable territory.

Thanks to Liza Serfontein for preventing a Casevac and to Jacolise Joubert for the photos recording the operation.