To Eland or not to Eland – or possibly (To) ring or not (To) ring. Those were the questions that surfaced weeks prior to Sunday’s outing and really started to come sharply into focus 7 days prior. The hike came within a whisker of cancellation on both counts, and I think all who took part will agree that it was fortunate that they failed on both.

The anticipated nasty cold front passed by quickly on Thursday leaving some anxious questions behind it but as the clouds cleared on the mountains above Ladismith, positive reports began filtering back on Friday morning from our forward observers. So, with no snow visible and the forecast for sunshine over the weekend the packing began.

On Saturday night we elected to RV in downtown Ladismith. Our establishment of choice was holding a “pool” tournament, so we opted for the cosy fire over the road instead. It was agreed that alarms would be set for 5am and we would all meet at 6am to head for the start of the trail. 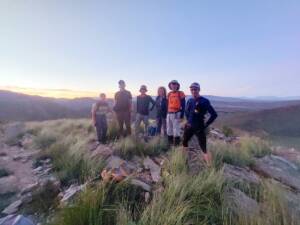 By 0635 on Sunday morning seven headtorches were bobbing along the trail in the darkness. For the first 2 hours we followed the Liggie trail before veering off it and starting a more serious line of ascent. The going could be classified as reasonably heavy bundu (by Swartberg standards) or moderate to light bundu (by Outeniqua standards). After 90 minutes of ascent, we were confronted by the unscalable cliffs of the Elandsberg massif. We followed these to the left (North) taking us around the back of the mountain and we now started to overlook the entire Buffelskloof ravine. Towerkop dominated the Northern skyline and after some careful examination the Buffelskloof arch was spotted in the distance. 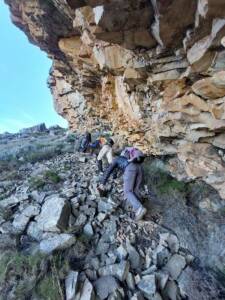 Climbing up beneath the overhanging cliffs on the North side of the mountain.

The weather played along with us in no uncertain terms. It was cold but we were warmed by the full strength of a winter’s day sun. What really swung the balance in our favour was the complete absence of wind. Not a single breath of wind the entire day!

By 1230 we were safely on top and basking in the sunshine and soaking up the forever views stretching in all directions. To our North lay Towerkop and Toorberg and to our East Peak Wood, Steenslang and Seweweekspoortpiek beyond.

Climbing up beneath the overhanging cliffs on the North side of the mountain. 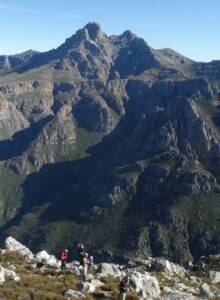 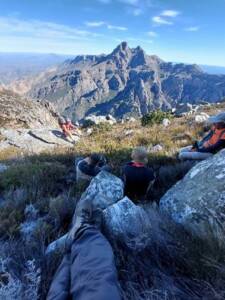 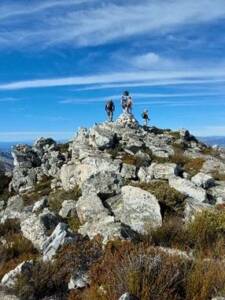 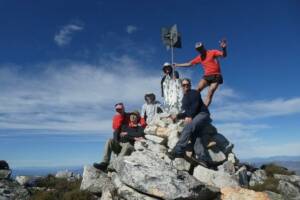 After a relaxing 40 mins break for lunch, we were on the move again. We decided to descend the first kilometre by the Southern route. We had spotted pockets of snow on the way up and saw a dusting on the rocks as we started to descend. This pocket dusting turned out to be more significant than we had imagined. The snow on the rocks at best was frozen and at worst had turned into black ice. Going was treacherous and slow but we took extreme care, and no one had a serious slip.

However, it was with great relief when we return into the sunshine on the Northern side where we joined out upward trail and continued with our descent. 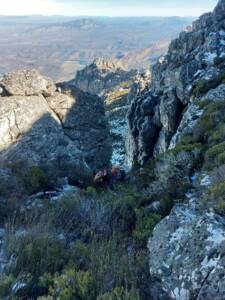 Down the Southern “polar” route 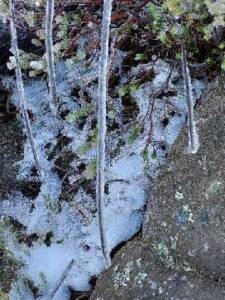 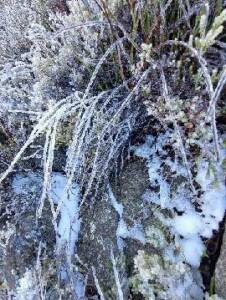 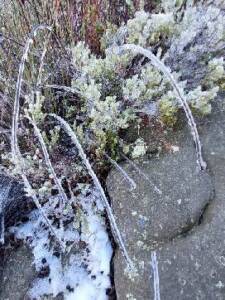 We reached the parked vehicles at 1730 after a long and hard but thoroughly rewarding day in the mountains.

Thanks to Donovan and Samantha for their very kind hospitality, to Hugh our Polar Adventurer who navigated our way magnificently and to all the team members whose enthusiasm and company made this an adventure that was not to be missed! 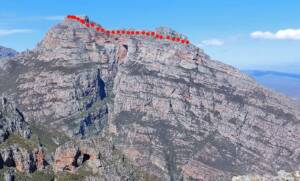 Our Northern route to the summit

A” best estimate” of our Southern “polar” route off the summit (??) 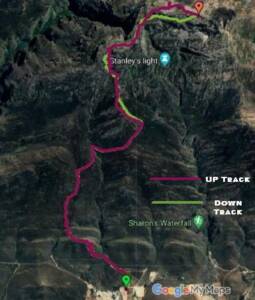