A modern-day mission to climb a ‘lookout’ and discover “Grace from Above “.

At 1465 metres Uitkykkop (pronounced eightkickkop) ranks as the 273rd highest peak in the Western Cape. I’ve had an inkling for a while now that calling it a mere “kop” was both somewhat demeaning and inaccurate. This weekend has been brewing for some years now and it was time to set the records straight.

This visit to the Sonderend mountains was a long weekend affair. The weather prediction suggested our main goal be tackled on day two.

And so, day one dawned and we decided to find out a bit more about a Greyton legend who went by the name of Abdol and had a ‘kop’ named after him. Fact finding has revealed that Abdol was a carpenter who built St Andrews church in Greyton in 1898. Stones were collected from the nearby hills and carried by ox-wagon to the building site. Abdol was paid by the hour and was always concerned that rain would halt his operations and so adopted the habit of glancing toward the kop to ascertain whether rain clouds were forming. His workmates decided to call the kop after him and Greytonians today still consider it a reliable indicator. 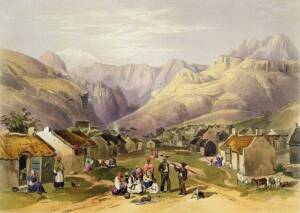 We reached the summit in about two hours and found no sign of rain or indeed Abdol. Some of us furtively glanced upwards along an enticing looking ridge line leading up to Perdekop which towered some 500 metres above. Our better judgement prevailed, and we decided to keep our ammunition dry for the following day’s target which beckoned us across the Noupoort valley. 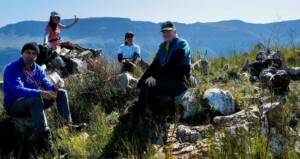 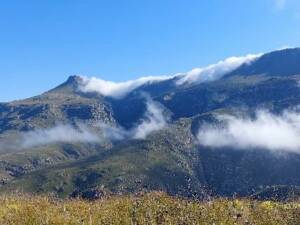 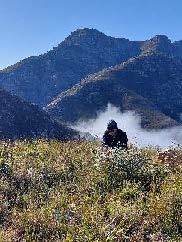 An early finish today left the various group members to their own devices in the afternoon before we reassembled that evening to ensure amongst other things that we were all on the same page with regards to starting times and meeting points. Thankfully this paid off and at 8 am the following morning we were all assembled, duly booted and spurred at the entrance to the Greyton Nature Reserve.

Group ready for the main event: 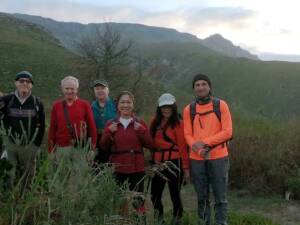 We entered the reserve savouring the last 100 yards of flat ground before embarking on the next 7 ½ hours of steep slope. We climbed 1217 metres to the summit at a relatively comfortable pace that was greatly aided by a clear path for about 75% of the route. This mountain was ravaged from top to bottom by a fire in 2019 that raged for between 2-3 weeks. This caused enormous damage to surrounding property and livelihood over an area exceeding 16,000 hectares. The vegetation has largely recovered now but was not sufficiently bushy to hinder our progress. Halfway up the mountain is a band of rock that looks somewhat daunting but is easily navigated across and at the top of this we paused for a mid-morning tea break. 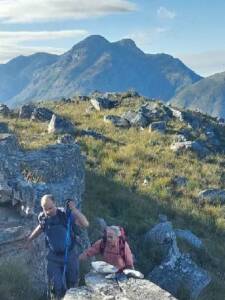 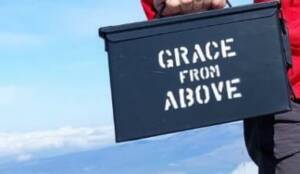 Left: Arriving at the top of the rock band for a mid-morning break. Perdekop across the valley.

Above this rocky band lies a plateau that slowly ascends to the base of what appears to be the final incline towards the cliffs just below the apparent summit. At this point the incline increases by about three-fold in severity and it was at this point that we were hit by a strong and very icy wind from the North. We donned beanies, gloves, muffs, jackets and leant into the wind only finding respite when we finally reached the cliffs above. 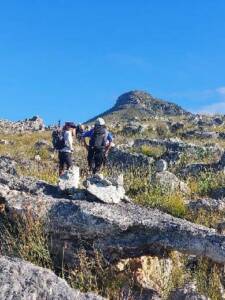 Clearing the top of the rock band 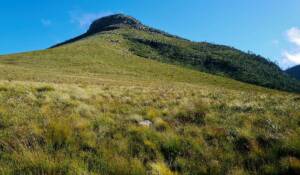 On the plateau with Uitkykkop summit in sight
(Photo credit: Dennis Lange)

At the cliffs we contoured around to the back of the ridge where we were pleased to find a nice albeit quite steep grassy gully. Reaching the top of this and after a bit more rock scrambling along the ridge we arrived at a small saddle where the real summit was revealed. The final bluff was easily scrambled by picking a careful line and within 15 minutes we were all on top enjoying the views towards Worcester in the North and overlooking the steep slope to the South onto Greyton and Genadendal. 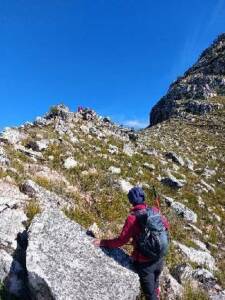 The final saddle with the last scramble ahead 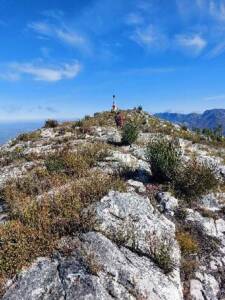 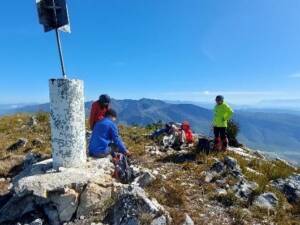 We had a leisurely break on the top where thankfully there was no evidence of the icy blast that had hit us on the way up. Our descent was that much speedier than our ascent, though as always was quite tough on the feet and legs with a lot of slipping and sliding on the loose rocks littering the path near the bottom end. 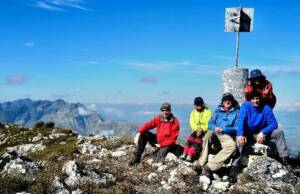 The Summit Musketeers (All bar One)
(Photo credit: Dennis Lange) 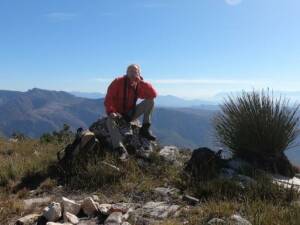 The Summit Musketeers (One bar All) 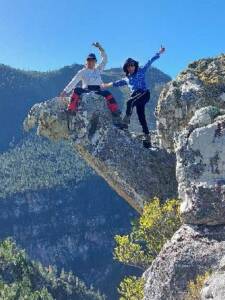 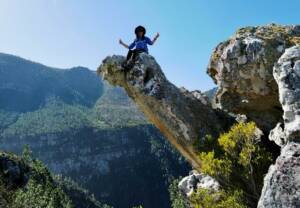 Gymnastics and Yoga on the way down
(Photo credit: Dennis Lange)

All safely at the bottom where we started, we were reunited with the one member of our team who had spent the day in town and were mercifully not interrogated by the park officials about the flower samples we were carrying (all in the name of research). 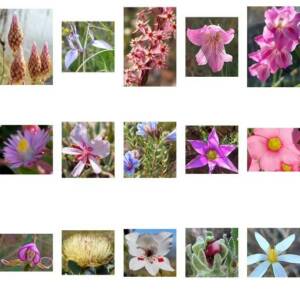 Footnote 1: One of our eagle-eyed group members spotted that in fact Abdolskop was not the mountain we climbed but the next hump in the line of succession slightly to our North East (about 100 metres away) and 11 metres higher. This was verified by a knowledgeable local in the village who climbs these hills a lot. The Chief Directorate of National Geo-Spatial information who produced the 1:50 000 OS maps will be contacted for comment regarding this error.

Footnote 2: Some of our group stayed at a Guest House in Greyton called the Blue Door. They were greeted upon arrival by the Manager who introduced herself as Rita Nefdt, the great (great?) granddaughter of none other than Gustav Nefdt of Ladismith origin who in 1885 made his famous ascent of Towerkop!