Skurwekop (in the shadow of Cradock Peak) | 21 August

Skurwekop (in the shadow of Cradock Peak) | 21 August

Approaching George from Sedgefield along the N2, Cradock Peak dominates the skyline and holds court over the lesser masses grouped around it. Together they form a formidable backdrop to the City of George and exude a beckoning call to any self-respecting hiker making his way along the National highway.

One of the lesser masses forming part of the assembly is the unfortunately named Skurwekop. It is possible to distinguish this minor blip on the skyline with a knowledgeable glance but one’s gaze is inevitably distracted and drawn upwards by the magnetic allure of it towering neighbour in whose shadow it lies.

However, it is in this shadow where the secrets lie and the raison d’etre for today’s mountain meander.

If truth be told, Cradock Peak from the Southern perspective is no more than the bonnet of the vehicle. Impressive curves and even its own hood ornament in the form of George Peak but these hide and conceal the mechanics and the working parts hidden beneath. To really understand and appreciate this giant one must get around behind it, into its shadow, where all is revealed and that is where a journey to Skurwekop really fits into the picture. 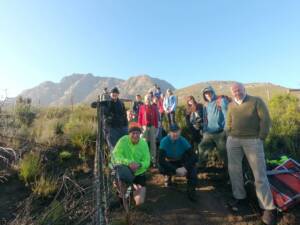 Getting into position to explore these hidden parts takes a while so an early start was called for, especially for those venturing from Knysna side. Nevertheless, after the customary photo shoot an equipment check and a short sermon the sizeable group of sixteen was on the march by 0815. 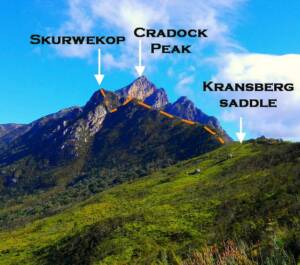 Skurwekop – a mere blip on the ridge between Kransberg saddle and the all dominating Cradock Peak.

We knew we had a long day ahead, so a brisk pace was established by the front runners. Fortunately, 95% of today’s meet was on a good path that allowed the participants to cast their gaze upwards towards the sheer cliffs and buttresses cascading down from Craddock’s summit. This spectacle developed and evolved as we engineered our way along the North flank before swinging around along the Eastern façade. After the heavy downpours in recent days the path was somewhat slippery in places and there were numerous river crossings to be made. Fortunately, most of the rain that falls on this section of the Outeniqua mountains get thrown down the opposite side and is earmarked for the coast to the South. For the most part though, complete submersion was avoided though there were a few close calls the most notable of which was perhaps the leader himself. 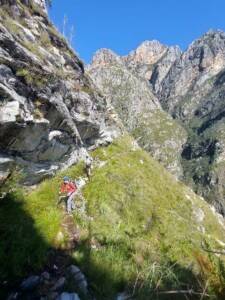 Nearing the top of “Heartbreak hill” with Cradock Peak behind overlooking Kloofbossie below.

After a lengthy section of contouring along the Eastern flanks one descends into Kloofbossie and is afforded a splendid view across the kloof to “Heartbreak hill”, snaking forever upwards on the opposite side. Normally, especially in the heat of summer, Kloofbossie affords a fantastic shady respite before the anguish and toil of the hill ahead. By now however the group was spread over a distance of maybe 500 metres and the leaders pushed on and up towards the saddle that lies between Kransberg and Skurwekop. 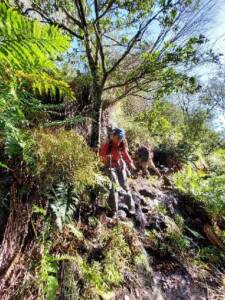 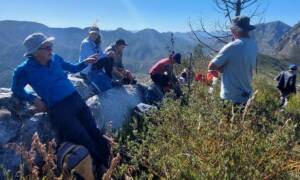 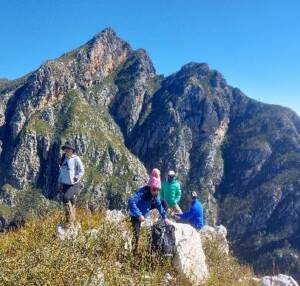 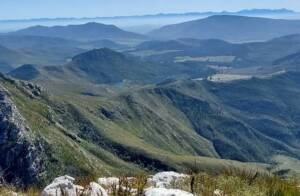 from Skurwekop to the North with trail visible 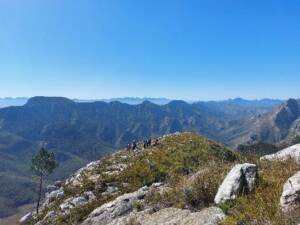 Two and a half hours after starting we reached Kransberg saddle where we turned 270 degrees upon ourselves and started up the final stretch to Skurwekop with Cradock now directly in front of us. A short pause here allowed most of us to regroup and ensure we were all headed in the right direction. For the first time in the day, we now left the recognised and long established trail (formerly the old Outeniqua trail) and started up the ridge line which could have been unadulterated Outeniqua bundu of the Fynbos variety. However, since the fires in 2018 which opened large swathes of the mountain this has become a popular route enjoyed by the Trail runners, so whilst not as established, there was a somewhat discernible route for us to follow. It was steep and slippery here and after 15 mins we stopped for a well-deserved tea break.

Our target was now clearly in sight with the main attraction of Cradock above and beyond. At this point a few members decided to call it a day and retrace their steps back. The remaining twelve members continued up the ridge and within about 30 minutes were all on the top of Skurwekop at 12.00pm.

Thirty minutes was spent soaking up the surroundings, enjoying the fabulous winter weather and generally refuelling for the long walk back. Snow was visible on the distant Swartberg and Kamannasie peaks.

A more leisurely pace was adopted on the return and a lengthy pause in the shade of Kloofbossie was enjoyed by all. In spite of this our return was quicker by about 30 minutes and by 4pm the whole group (including the breakaways) was reunited at our cars on the Montagu Pass.

Whilst the small bump on the horizon with the unfortunate name (investigations have come up with “Scabies”! “Scurvy Head”! and the slightly more palatable but still rather derogatory “Rough to the touch”!) I would like to remember this koppie as a rough diamond that sparkles quietly amongst its peers. Perhaps not the biggest attraction on the stage it provided a wonderful journey through a magical landscape that many have and will overlook. 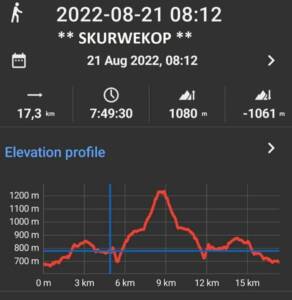 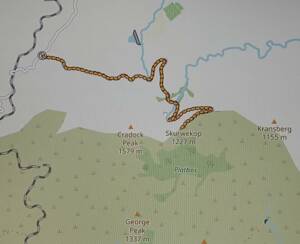